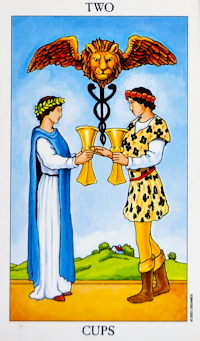 Two of Cups. The man and woman are exchanging cups to demonstrate the law of give and take. This is also the symbol of the duality of creation. The winged lion above the caduceus is a composite symbol meaning, 'The adept who has power to interpret to others knowledge of the higher worlds." The woman is dressed in white with a blue outer robe to show the purity underlying the soul or subconscious. The man's costume has a yellow background which stands for consciousness and is decorated with trefoils symbolizing the trinity. The house in the background represents the creativity of humanity or the united effort of male and female.

Celebrities with "Two Of Cups" Attitude 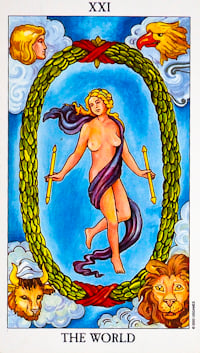