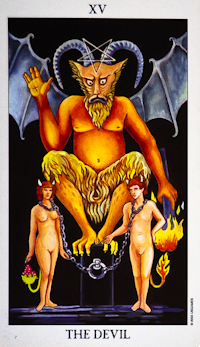 Key 15 The Devil. Key 15 shows what happens when we fail to use discrimination. The Devil is a misconception of God, as God upside down or opposite. He represents the delusion of judging by outward appearances instead of by inner realities. He also represents religious dogmatism, which is ridiculous to the enlightened person. Therefore, the keyword here is mirth. We should learn to laugh in the face of difficulties. For laughter or ridicule is sometimes the most effective defense against evil.

Capricorn, ruled by Saturn, overshadows this key. The Saturn center at the base of the spine is where the kundalini force lies coiled, and it is the life work of Capricorn to raise the kundalini, and then teach others.

The black background on this card indicates ignorance, lack of light. The inverted pentagram on the Devil's forehead is the symbol of black magic, inverted power. His torch burns wastefully and gives no light. The humans, chained loosely to the half cube could easily free themselves by refusing to be bound by darkness and imperfect knowledge or half truth-as indicated by the half cube.

This key means we are God incarnate, but all too often we play a role in an upside down position, as undeveloped people, chained in bondage to appearance. 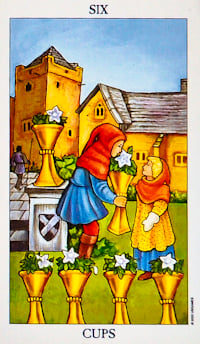