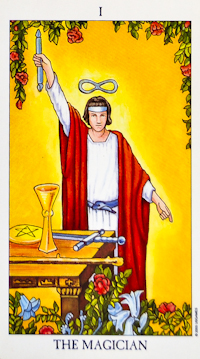 The Magician represents the conscious mind, which by concentration and single-minded attention to a specific idea or goal can draw upon the forces from above. In this way, the idea or goal will take the form and become a reality in the material world. By his posture, the central figure clearly indicates that he is merely a channel through which the life force flows. The identical ends of his wand graphically represent the axiom as above; so below. The horizontal figure 8 symbolizes the Holy Spirit, dominion, strength and infinity. Since a horizontal line is the ancient symbol for matter, this glyph represents the conscious mind's control over earthly things when that mind directs the life energy through fixed attention upon a specific goal.

The Magician's undergarment, symbolizing the light of perfect wisdom, is encircled by the serpent of eternity biting its own tail. The red outer garment of passion and desire, which has no binding, may be slipped on and off at will; thus, the conscious mind has perfect control.

The garden is the subconscious mind cultivated by attention from the conscious mind. Red roses represent desires, while lilies represent purified thought untinged by desire. Every moment of our waking consciousness is motivated and conditioned by some kind of desire, which must be elevated to a higher plane. The Magician has at his disposal all the elements and their human counterparts: the cup, indicating water and the imagination; the sword, indicating air and the intellect; the pentacle, earth and the body; and the wand, fire and will. These four objects represent the letters IHVH, which is the Hebrew word for God, and the letters INRI (Iesus Nazarenus Rex Iudaeorum) which appear on the Christian cross. At this point, the God energy may be translated into the world of matter to bring about perfect manifestation and harmony. 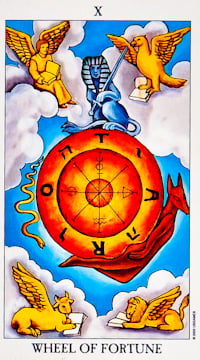