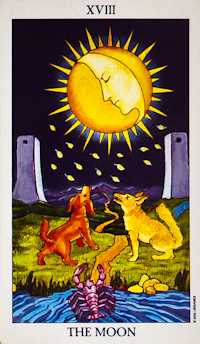 Key 18 The Moon. Evolutionary growth and development come under key 18. The keywords are organization and sleep. The function of the Moon is sleep, and, during sleep, waste is eliminated and new materials are woven into the body. Consciousness continues while the upper brain cells rest. It is during sleep that our aspirations and efforts are being built into the body cells.

What we think and do all day goes on influencing the body while we sleep. Every cell is a center of consciousness, and every cell contains spirit. Astrologically, Pisces, the final sign of the zodiac, rules this key.

The shellfish coming out of the water represents the lower form of existence. Shaped like a scorpion, it indicates the creative force starting on the path of return, which leads to the mountain of attainment. The narrow path implies that concentration is necessary. It goes up, then down, but always rises higher at the next step. It is meant to show that spiritual unfoldment does not come all at once, but rather progresses gradually.

The dog and wolf are of the same species, but one is wild and the other is domesticated (depicting nature aided by human consciousness). The towers are human handiwork. The thirty-two rays of the Moon indicate the thirty-two paths on the Tree of Life, and the falling yods represent the descent of the life force from a higher plane into the material world. Many symbols here show that we can change the outward structure of things. They are proof that the same changes may be accomplished within the body through organization and cultivation. 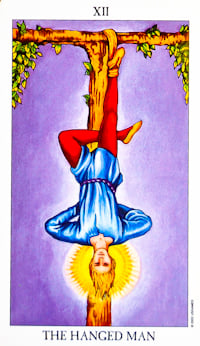