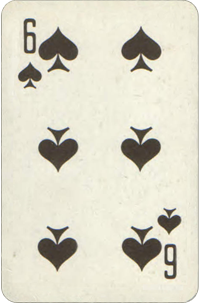 The card of responsibility and awakening to the Law, the Six as Spades as a karma card puts definite obligations on the Two Of Spades person. Their task is to live on strictly constructive basis; to avoid self-indulgence at the expense of work or duty; to be willing to serve - regardless of rewards, and not to spare themselves in hard work, which is one part of the mission they have come to fulfill.

Practicality and common sense must be developed as early as possible. Otherwise, the Two of Spades can easily thrown off the balance, lost in daydreaming and a realm of unreality, and later in life develop a neurosis that might have serious consequences. So great is the power, those Two Of Spades, who are consciously headed for evil become "Black Magicians."

A man in love is incomplete until he has married. Then he's finished. - Zsa Zsa Gabor

The number 6 has a special significance. It represents the "Law and Order" and also associated with a Karmic Law of cause and effect. Number 6 is a perfect number, symmetrical in all parts, the number of the Soul. Therefore, people of number Six have a special mission in their life. Sixes is obligated to hold justice and truth very high and most of them do it naturally. The biggest challenge of Sixes is in their tendency to laziness and monotony, an enemies of growth and progress. Those sixes who flee their responsibilities, refusing all adjustments, preferring action to protection, selfishness to love, freedom to responsibility, gain the effect of their doings in this lifetime. Others, who follow the law, obtain the wonderful contentment and serenity associated with number Six. Six is a natural diplomat who needs involvement with other to share his or her warm charm, intuitive intellect and friendly responsibility of well-being of others.

Unlock your inner potential! Knowledge is power. Use the key components of your personality to create aspiring vibrations of success and attract possibilities into your life!
L Ron Hubbard & Mary Sue Hubbard

A man should look for what is, and not for what he thinks should be. - Albert Einstein
People Born on July 6