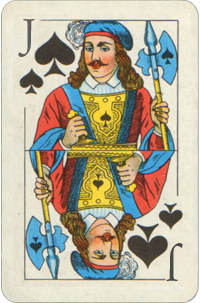 All Jacks correspond with number 11. By some called the number of Evil because it transcended the number of commandments, and did not attain 12, the number of Grace and perfection. History and experience refuse its stigma. Number 11 is the most priceless gift of God. It is man (1) beside God (10). Jacks are sons of the Kings. They carry great responsibility, and the disposal of their lives rests entirely on their decision. They represent the mental attitudes of any suit, and of course; our mental attitudes are totally within our control. We can rule them and win the crown, or we may consign them to every wind that blows and struggle in a state of immaturity as long as we live.

Jack of Spades is one the most fortunate cards with life loaded with many opportunities and extreme alternatives. They belong to the hierarchy of authority, and they know they must learn how to take their place among the crowned ones. Youthful nature may contradict with need to master the maturity in order to cope with significant responsibility indicated by this card. How Jack of Spades uses their power is completely a matter of choice. They can become the most successful ones with awareness of the fact that they are learners of higher wisdom, and supreme dignity that is born of recognition of their calling and the certainty that they will achieve their goals in the end. Then they appreciate the value of education and training in any profession they can express their great abilities. They work for the mean - and not for a paycheck. They refuse to worry about money or personal success, understanding the importance of their honorable intentions.

All Jack of Spades, men or women, have masculine type of mind. They have the great possibility to inherit large sums of money. They are successful in fields of medicine, work well with others, especially with groups of men. They are good planners and executives; can follow a well-defined and carefully lay out course. Business is usually based upon friendly contacts, and help from friends.

Jack of Spades have a gift of handling people and can depend on the loyalty from employees. More developed their intuitive power more successful they become. Intelligence is a natural gift. Spiritual insights develop early. Love is also important, and they are blessed when they have someone who loves them with devotion and who they can rely on.

There are Jack of Spades, who use their considerable abilities to selfish means. They are subject of scandals and disgrace, to misinterpretation of their motives, disappointments in their friends and the lack of accomplishments in their work. It is strange that this card that can symbolize profound spiritual insights, often becomes a symbol of con artists, blackmailers and thieves. Jack of Spades is open to higher wisdom, and it is the personal choice that makes a difference and invites energy of either positive or negative nature. 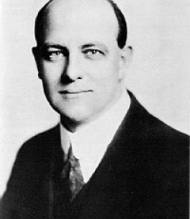 When you have been just told that the girl you love is definitely betrothed to another, you begin to understand how Anarchists must feel when the bomb goes off too soon. - Pelham Wodehouse
People Born on September 17