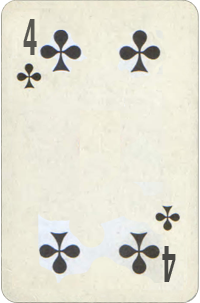 Out of all birthday, Four (4) are among the most fortunate. It gives them an excellent start - with protection, security, sufficiency, but like with any other card how we use our potential is what creates our success in life. Four of Clubs are builders and foundation of Knowledge - the knowledge to be share and profit, educate and grow. Four is also a number of the Emperor. Fours must be in command of every situation that arises. They are dealing with practical applications of knowledge, and they the power to glorify it.

Four of Clubs are very active and energetic people. They are looking for mental security and stability through the desire for change in the name of progress. Their restless nature is rarely satisfied with traditional education, and there is a constant search for new ways to become more active and substantial. They can significantly contribute to the literature, philosophy, and education in general.

They have good judgment and the appeal to those of intelligence and common sense. They usually stick to tradition and principle, unless it interferes with progress. Very patriotic, they don't escape from fundamentals. They made great lawyers and lawmakers. They often know how to listen to debates and arguments, but some tend to talk much and say little. They are not concerned with the topic that they think is not important and will not waste their time or brains on small matters.

Either man or woman Four Of Clubs can achieve great success in work and career, taking on superior positions. Women Four Of Clubs have an extraordinary gift of intuition and extrasensory perception and run for jobs usually held by men. Many Four of Clubs becomes politicians and economists.

Four of Clubs resist stupidity and triviality because they are mental fundamentalists with the understanding that growth and expansion are possible only through constant activity along intellectual lines.