Family of Seven. Who Is Your Spiritual Twin?

You can name it magic. You can call it God. You can say it's just the nature of the universe. We can observe the patterns of Seven everywhere around us and beyond - seven wonders of the ancient world, seven days in a week, seven colors of the rainbow, seven rows in the periodic table, seven major planets in the lithosphere. Seven deadly sins (that's right). Do you have six sons? Beware: in some folklores a seventh son turn to be a werewolf. Remember the Seven Ages of Man by William Shakespeare? "All the world is a stage and all the men and women merely players." Not just a brilliant idea of literary genius, but a beautifully delivered response to the Speculum Theologiae's diagrams collection.

"From the throne came flashes of lightning, rumblings, and peals of thunder. Before the throne, seven lamps were blazing. These are the seven spirits of God." (Revelation 4:5).

Destiny Cards system is based on the number 7 pattern. 7 planets make 7 rows. 7 lines in the cards' spread. 49 cards create a perfect table with 7 cards diagonally, vertically and horizontally The 52 card's emblems being multiplied by the 7 (planets) is 364 - one year round minus one (Joker card.) The sacred number of the Magi – 1428571 is a product of 7 (14, 28, 56+1). And there is the Magnificent Seven, the family of Seven, or whatever you'd like to call it – Seven Cards that have very peculiar qualities, and so people who are born on days associated with these unusual vibrations. Here is a list of unique Seven Cards:

There is no accident that people associated with cards above often relate to each other in families. It is a "Family" of Seven after all. Slightly alienated from the rest of the world, it sure feels more natural to make through childhood with father, or grandma who can understand you in a way no one else does. Do you have "related" friends? Keep them dearly. There are the ones who will give you a hand when life sucks. If you fall in love with someone of your "kind," enjoy your time together. Moments of true soul intimacy are precious. There is some talk whether marriage is possible among spiritual "cousins", but as we can see Nicole Kidman and Keith Urban are pretty happy together despite traditional beliefs of destiny-take-you-apart when it comes to the Family of Seven.

What makes these seven cards so different from others? It is a mathematical observation of card's movement in quadrations. There are three cards – King of Spades, Jack of Hearts and Eight of Clubs that never change its position after no matter how many times you quadrate the deck. It is a reason these three cards are called FIXED. Such unusual behavior of cards brings up fixed personal qualities. If you are the Eight of Clubs, for example, no one can make you change your mind once it's been set. The King of Spades have no doubts once they chose their way of life, or their belief system. The firm determination and the ability to stand by adopted standards, no matter how unusual they may seem to an observer, is the prime quality of fixed cards. Shall we talk about Arnold Schwarzenegger (Jack of Hearts), who said: "Strength does not come from winning. Your struggles develop your strengths. When you go through hardships and decide not to surrender, that is strength."

Besides three fixed cards, other four cards make it to seven in two couples. Every other year they move to each other positions. These couples are:

Seven of Diamonds – Nine of Hearts

Ace of Clubs – Two of Hearts

Being in each other shoes every other year makes you share some a-like perspectives, doesn't it? At some point, it's hard to differentiate yourself from your twin-brother or sister.

By the time of birth, cards are found in specific positions. Some are born in beautiful mansions, others – in rough environments. No matter where we came from, every year as the majority (46, to be precise) of Birth Cards change their positions, they move to someone else's house. You may love it, or hate it, but living in a different neighborhood for a year or so makes you more flexible in life. At least you can see life from different angles. The "houses" of the Family of Seven are never available for rent by outsiders.

With the house ownership come certain attitudes. "No trespassing. It is my territory. All violators will be shot. Survivors will be shot again." People who are born in the Family of Seven know for a fact – people move in and out, they come and go, they are friends today, and they are distant stars tomorrow. People scream, children cry, dogs bark. You watch them through the window, wondering at times – what is this big fuss all about? A cherished thought of being like everyone else crosses your mind, but with time, you realize that you have never been, and you never will be like anyone else, and that's what makes you unique and graceful.

"The worst thing I can be is the same as everybody else. I hate that," - Arnold Schwarzenegger (Jack of Hearts)

The idea of having no Karma Cards comes from the same rule of displacement (rent). The Magnificent Seven have no karma cards. Don't mistake it with having no karma. To be one of a kind can be a gift or a curse. Isn't easier to walk in someone else's shoes? When you walk in your own footwears, there is no one to blame when it wears off.

"I do not think that there is any other quality so essential to the success of any kind as the quality of perseverance. It overcomes almost everything, even nature." - John D. Rockefeller (Seven of Diamonds) 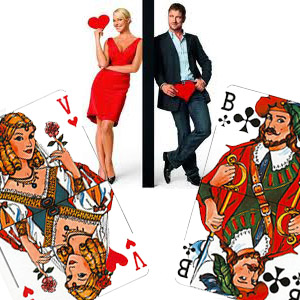 How To Read Cards? 3 Basic Rules of Interpretation. 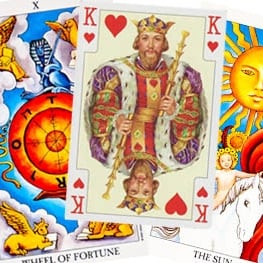 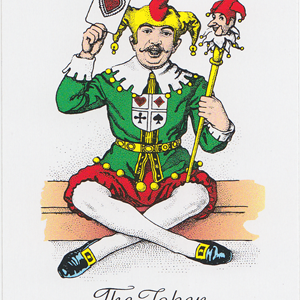 Why Can't I Get Compatibility Reading With The Joker?
Hannah Joseph