After decades among Hollywood's most respected actors, Jack Nicholson has become a movie icon on a par with such old-time stars as Humphrey Bogart or John Wayne. His 12 Oscar nominations run second only to Meryl Streep's 13. He has won the trophy three times, for One Flew Over the Cuckoo's Nest in 1975, Terms of Endearment in 1983, and As Good as It Gets in 1997.

Nicholson thought he had a fairly normal upbringing, with a hard-working mother and a hard-drinking father who sometimes took young Jack to the movies, sometimes to the bar. But like the plot of a good Nicholson movie, nothing was what it seemed. The girl Nicholson thought was his sister was actually his mother, who had become pregnant in high school. The woman he thought was his mother was really his grandmother. And in a heartwrenching twist to the tale, Nicholson says he never knew any of this until he became famous -- after both women were dead -- when Time Magazine published an exposé of his past.

In his teens, Nicholson was a paradox in school. He was voted "most optimistic" in his class -- and "most pessimistic." He was a troublemaker, always being sent to the principal's office for swearing, smoking, talking back to teachers, or pranks and practical jokes. But he was also a straight-A student. Smart -- but subversive, in keeping with what was to follow.

When he first came to Hollywood, Nicholson worked as an office boy, delivering packages and flirting with the secretaries at Metro-Goldwyn-Mayer by day, and spending his evenings in acting class or on stage in local plays. He was soon hired by moviemaking tightwad Roger Corman, who gave Nicholson his first film work -- the title role in The Cry Baby Killer, playing a juvenile delinquent who thinks he can get out of trouble by taking hostages. 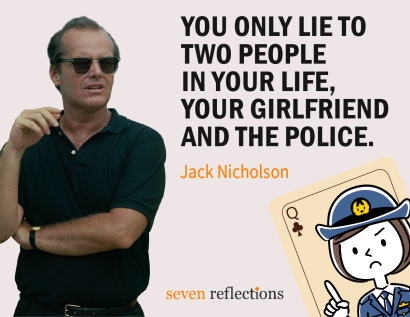