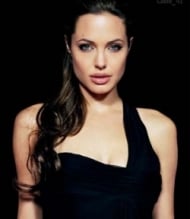 They're right to think that about me, because I'm the person most likely to sleep with my female fans, I genuinely love other women. And I think they know that. - Angelina Jolie
People Born on July 2