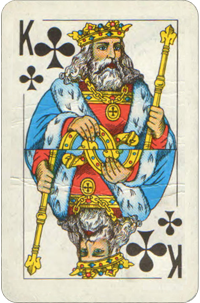 The King of Clubs as a Karma Cousin gives the Two of Spades the top level of mental development. They are often genius. They can successfully work and become managers and directors in any field that requires high IQ, and rarely becomes too bossy. They have a great deal of knowledge and ability to pass it to others. They can be considered highly rational, but they are also able to see and understand the higher level of the realm.

I think women have an innate ability to be intuitive with people that they truly love, but they have to trust that inner voice, and I think it is there. I think we are more intuitive than men. - Andie Macdowell

Women must be quite beautiful to be loved by men, and quite foolish to love them. - Coco Chanel
People Born on September 17