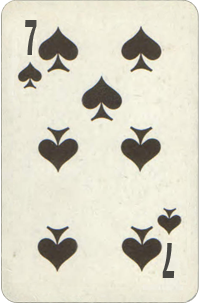 Seven is the most mystical of all numbers, the hardest to understand or the most beautiful and rewarding influence in anyone's life. On the Tree of Life, the 7th is the Sphere of Victory. Seven is "Perfect" Number, and difficult to live up to this requirement of perfection. Seven is the number of our soul. There are no "young souls" with 7 Birth Card.

The Seven of Spades is called a card of "Spiritual Victory." People born under this birth card are powerful and often become leaders. They are charming and have no lack in romantic involvements as well as they never lack good fortune. They work quietly - often secretly - and usually willing to remain behind the scenes. They can make a great career in the secret service and greatly benefit from their instinctive perception of truth and falsehood.

The Seven of Spades have many friends, but few loves. They are generous and willing to serve others. Of all cards, they represent the best teachers and wisest counselors. In the business, they are reliable. In love, they are faithful. Deep inside they know that everything they do will be accounted for, and whatever pain or sorrow they experience is just a debt, payments for which is justly demanded.

The Seven of Spades are good students and good debaters. They are cooperative and work well in partnerships, and even they sometimes develop tendency for introversion due to fears, they have much more to gain by sharing with others and by working in associations. They are good executives, often leaders of welfare groups, housing committees, great agents, negotiators.

The Seven of Spades don't like frivolity. They attracted to people of strong mental power. The women often get marry an older men with a mental type of work. Their emotions are deep and lasting, and relationships are built on respect and admiration rather than on demonstration.

The Seven of Spades are very trustworthy and capable at handling accounts and finances for others. They often work in charitable and humanitarian organization, usually behind the scenes. They will work very hard to get things done. They have legal mind and always keep their private lives and business well separated. 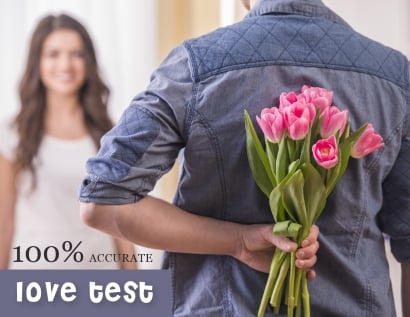 Card of the Day
Ten of Spades

Who was born on the 2nd of February